This is part two of a series on transformative Signature Courses. 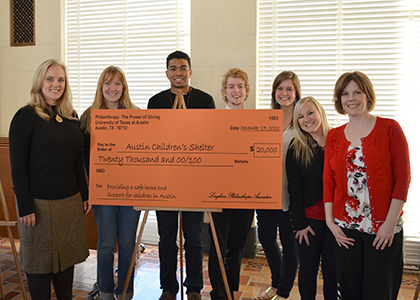 Philanthropy is a far-off thought for most college freshmen, best left to those with deeper pockets. The Signature Course “Philanthropy: The Power of Giving” changes that, giving first-year students real money to donate to charities after a semester of debate and research.

In just two semesters, the class has donated $200,000 to charities, from smaller local organizations like the Lone Star Paralysis Foundation to larger global initiatives like Kiva. Pamela Paxton, professor in the Department of Sociology in the College of Liberal Arts, began teaching the course in the fall of 2012 and will teach it this spring.

“Because I’m a social scientist, we go over the non-profit sector generally, then I emphasize the evaluation of charities,” Paxton said.

The class of about 50 students splits into groups of five. Each group does in-depth analysis of charities and selects the one for which they will advocate. Through a variety of methods, like fierce in-class debates and analysis of Internal Revenue Service documents, the class selects five charities to receive donations.

The School of Undergraduate Studies inaugural dean, Paul Woodruff, created the course in the spring of 2012 with a $100,000 donation from the Once Upon a Time Foundation. While their initial donation was anonymous, the foundation has since created a program called The Philanthropy Lab, which has given $2,045,000 to similar programs at 12 major universities.

A new funding model from The Philanthropy Lab will give this spring’s Signature Course more funds to work with—expanding the number of charities and the scope of the course. The foundation has donated $50,000, and if the School of Undergraduate Studies raises an additional $50,000, the foundation will match that, giving the students up to $150,000 to distribute.

Paxton believes this new funding model will appeal to donors.

“In a sense, what the university can say is, ‘Give us your $1,000. That money will be given to charities that have been vetted and researched and debated ad nauseam by intelligent, dedicated students,’” Paxton said.

Beyond the Confines of a Classroom

Paxton hopes to keep students engaged after their donations have been distributed and the final grades posted. Part of the agreement with the Once Upon A Time Foundation is that students follow up with the charities to ensure the money is being spent in accordance with the guidelines laid out by the class.

Students like Maclean Martin, a junior majoring in Finance and Plan II, have continued their work in philanthropy after completing the Signature Course. Martin and several of his fellow students from Woodruff’s philanthropy course created the Longhorn Philanthropic Association to further their relationships with charities they selected. The group also works to raise funds for future semesters of the course.

“For me, the class has ignited a passion and a drive to want to continue philanthropy work,” Martin said. “I also want to offer that same opportunity to other students.”